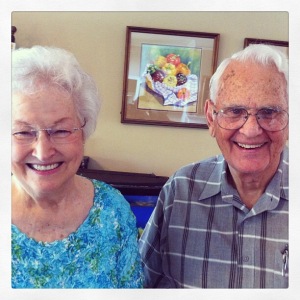 Papaw is the name I used for a man named Gene Felder. He was my mom’s dad, a Southern gentleman, a funny guy, a true heart, a faithful Christian, husband, father, grandfather and friend.  On Friday, April 24, 2015, he breathed his last breath on this earth.  Here are some thoughts I shared at his funeral.

Just a couple of weeks ago, I was sitting in the hospital with Papaw and I had the privilege of listening to the story of how he first saw my Mimi (his wife, Maxine)  at a youth revival at Felder’s Campground. She was fifteen at the time, and he was seventeen. I’ve heard the story before, many times, but I didn’t mind hearing it again.  Since I was a little kid, I’ve always thought that my grandparents were such a romantic pair; it’s rare to find couples who are still so in love with each other after so many years.

Papaw was describing how, when he saw Maxine for the first time, he thought she was the most beautiful girl in the world, and he distinctly remembered wondering “Where have you been all my life?”

He confessed that he couldn’t bring himself to actually say that to her; he thought it was too corny.

Actually, he couldn’t think of anything to say to this lovely, young girl whom people often confused with Ava Gardner…AND if you knew Gene at all, you know that it wasn’t often that he was at a loss for words.

As fate would have it, Maxine ended up stopping by the pastor’s house later the same day, the pastor who happened to be Gene’s cousin (with whom he was staying).  Papaw couldn’t remember exactly what was said that afternoon, but he told me that he held her hand that evening on the front porch.

He never let go of that hand as their courtship developed over the next couple of years and throughout the 64 year span of their marriage.  She was the love of his life, and it seems as though he knew that from the moment he saw her.

This story says a lot about the way that Papaw lived.

He was a man who knew what he liked and what he wanted. He didn’t waste time about going after it. He didn’t mind working hard to make it happen.  Perhaps more importantly, he was loyal and faithful to those things he loved.  He treasured them and cultivated them.

Here are a few of those things he treasured:

His relationship with the Lord was something that was, in no way, stagnant. It was something he discussed and cultivated regularly. In fact, in just the past year he made it a new project to read the Bible from cover to cover.

He also treasured Maxine, my Mimi, in a way that could set a very high standard for husbands everywhere.  They were different in many ways, with all the usual barriers that men and women face, but he always made it clear that he was in her corner and he was so proud to be her man.

He loved the art of growing relationships, especially with members of his family and friends. It didn’t really matter if the friends were old or someone that he just decided to adopt.  If you let him, he’d invest in you.  From experience, I can tell you he was an exceptional grandfather.  He made an effort to keep up with you and what was going on in your life, and he remembered the details.  He asked good questions.   Even though I spent most of my life in GA, Papaw always knew what was going on with me.  Growing up, when I was interested in ballet, I’d receive newspaper articles in the mail from him about what the local company was performing.  Since I’ve been interested in writing, I’ve gotten many articles about authors and writing programs.  Written in the corner would be the words, “Just thought of you,” or “This might interest you!”  Even since I moved here he would set articles aside for me. I’ll really miss that. These little things would always make me feel so important, like I must really be special. I know I’m not the only one that Papaw made feel this way.

Some other things that were special about Gene:

He never met a stranger, and he definitely was not shy. One time, we were on a vacation in Gatlinburg, hanging out by the river at the Chimmeys. The people who at the picnic table next to us were grilling something that smelled good, so Papaw just walked right over to them and started talking. As their conversation would reveal, they were distantly related to him! He ended up sharing some of their food with them (surely his end-goal, my Papaw liked good food).

His straightforward honesty also set him apart. He was extremely blunt, sometimes to a fault.  Despite this, his sweetness softened the effect. Overall, you could always count on an honest opinion from him, and that’s a rare find in today’s world.

He loved to tell stories and jokes (even up until the end).

He was very sharp. He had a memory that was quick to call up relevant details and apply new concepts. He also had an active spirit; he liked to do things and see progress.  The past few months of illness have been hard for him, he struggled with being connected to an oxygen machine or a wheelchair.

He and my Mimi built a good life together, marked by much success and also much sorrow. They are both examples of what true strength and love can look like when tested by time.

In the end, the most important thing about Papaw’s life is that it was characterized by a deeply personal faith.  I have absolutely no doubt that he is in Heaven today.

In 1st Corinthians, chapter 15, Paul talks about the heavenly bodies that believers will receive on the longer side of eternity.  The Bible says that these bodies will be strong and incorruptible. I like to picture Papaw, a childhood survivor of polio, running around with both legs strong and whole.

I also like to think of him being reunited with his two children, my mom and uncle-his greatest earthly sorrows being that they left this world before he did.

Mostly, I like to think about him being with his Jesus.

Whenever someone dies it should remind us that this life is so short. We get such a limited amount of time to run this race here on earth, and even if we get a long time- in Gene’s case, 86 years- it still doesn’t seem like long enough.

Gene-my Papaw-ran just about the best race that anyone could run.  This loss is very hard for those of us who loved him terribly, but it’s so much easier because of the good and full life that he lived and the fact that we know- absolutely- where and how he is today. So I’ll see you later, Papaw. I love you.

One thought on “Papaw: A Great Man”