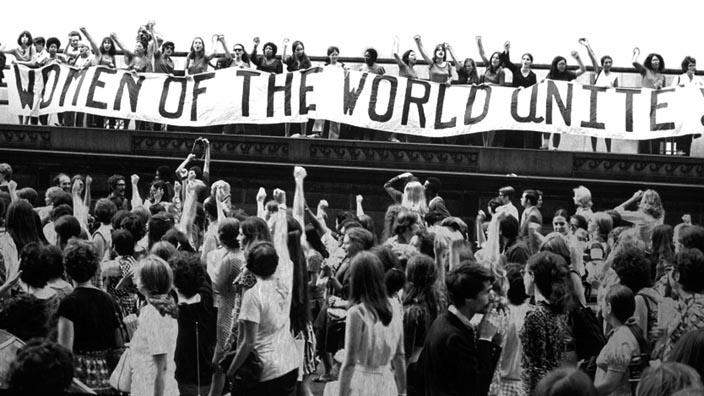 What do you think of when you hear the word, “feminist”? Come on. Be honest. If someone called you a feminist, how would you feel?  For a long time, it probably would have made me cringe a little bit. That word always conjured up impressions I’d been given by some of my super-liberal friends, ideas like: women shouldn’t shave their legs or wear makeup, abortion is a simple matter of women’s rights, and traditional female stereotypes should be protested, LOUDLY. I never identified with any of these ideas.  I’m a Christian. I’m politically conservative, soft-spoken and don’t like conflict. Frankly, I don’t take issue with Miss. America or Disney princesses.  I’m also a twenty-something wife who is happy to cook dinner most nights, I even wear an apron when I’m doing it (sometimes maybe red lipstick too, but only if I’m feeling sassy)! So most people would think I’m not a feminist, right? 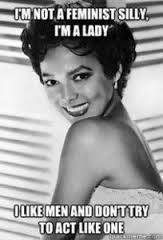 But the problem is, that picture-what the average person pictures when they hear the word “feminist,” is simply not the full picture.  What most people think of when they hear this word hearkens back to “second wave feminism,” a movement wherein women in the 1960s to 1980s reacted to the restrictive circumstances they had known up until that time. These circumstances mandated that all women should fit into a certain type, and the restrictions which resulted from that mandate was the real issue. However, those who protested this forced image often rebelled against the acceptable “type” in any way they could, actively opposing social norms of appearance, attitude and various kinds of expectations to make a point.

Oh, and they made a point.

This is where those ideas about man-haters come from: not because all 1970s hardcore feminists hated men, but maybe because the really loud ones did. Also, bra burning-that happened.

Fast forward to the 1990s, you know: glitter, Britney Spears, huge cell phones and-huzzah-the emergence of “girl power.”  I was pretty young in the 1990s, so I didn’t get what girl power was back then, but hey, there’s that feminism again, only now mama’s got a brand new bag.

This is because the feminist movement had, by this point, reached its “third wave.”  It had moved beyond women trying to compete with or be more like men. Now women were embracing the power of their own womanhood-whatever that might mean for each individual woman. This meant that-while certainly you shouldn’t feel obligated by society to wear make-up and heels- if you wanted to dress like a 1940s bombshell because it made you feel good about yourself, you should go for it.  If you don’t personally share a belief that society holds about women-whether it’s  about women in general or even about what feminists themselves should be like-you should not feel pressured to conform. Just as men are able to basically be anything they want, women should have the exact same amount of freedom.

This third wave of the Women’s Movement is still evolving today (some say it has reached a “fourth wave”), and doesn’t look like what you’ve been picturing alongside the heavily loaded term, “feminism.”  Ultimately, this is because women are feeling freer to be feminists in whatever way they want to be: CEO feminists, stay-at-home-by-choice feminists, feminist moms and feminist high-schoolers, feminists who hate Miss. America and feminists who compete for the title of Miss. America. And hey, get this, feminist men (yes that’s totally a thing)!

Because, simply put,  being feminist means that you support the rights of women to receive equal opportunities in life-not better, not even identical-just equal.

See if you agree with some of the following:

Any of these ring a bell? Guess what, if they did, you’ve got a little feminist in ya!

This is a very short list that exemplifies some feminist ideals.  So before some of you get in a huff, be sure and note that I fully admit that this is not comprehensive and doesn’t intend to sum up all feminists. My hope, however, is to show those of you with similar values to my own that the word, “feminist” is not something to be afraid of. Perhaps you’re very different from what most people think of when they think, “feminist.” I am.  For instance, not to be volcanic here, but I choose to validate the rights of unborn-male and female- children to live, and though I don’t deny that women’s bodies and lives are concerned, I do think that the lives of those who can’t speak for themselves ranks above a women’s rights issue (Wow, okay, that’s a whole other blog post, but I had to say it).  I express this belief here because I think it’s important for other women like me to realize that feminism doesn’t have to be against your other values-that’s the beauty of the third-wave. And doesn’t that actually get back to part of the original issue… The need to not feel pressured to conform to a certain “type”? The very reason I can call myself a feminist without agreeing on every particular with the face of the movement is actually a result of that movement….because I am one part of a very diverse group of people who share the over-arching ideal of gender equality and the belief that women should be able to be whoever and whatever they want to be, free of stigma.

3 thoughts on “So You Think You’re Not a Feminist?”